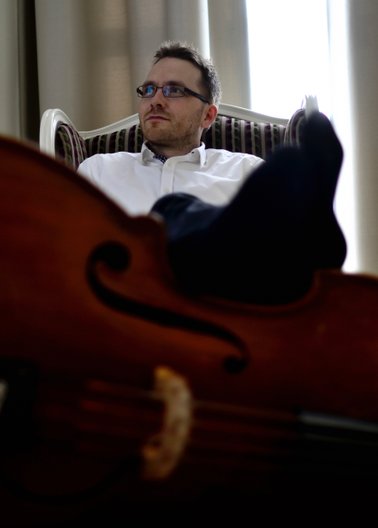 As severeal other jazz artists from Norway, Ole Marius Sandberg studied jazz at the Trondheim music conservatory (NTNU). This was in the late 90s and during this period he became heavily interested in what was going on in the scandinavian jazz scene. This influence has has played an important role in his development of sound ever since.

During his studies and for some years into the next decade, he played with pianist and composer Erlend Skomsvoll

in the project SKOMSORK. SKOMSORK did a couple of albums. The self titled debut was nominated for Spellemannsprisen (Norwegian grammy) and the other :Variasjoner was live recording of Skomsvolls comissioned work for the festival Vossajazz. Two of the other bandmembers, Thomas T Dahl and Eirik Hegdal, still are collaborators in various projects today.

Sandberg has since been an artist and a freelance bass player on both electric and double bass in several genres and has worked with a long list of known and more unknown Norwegian acts. Since 2009 he has been playing with pianist Dag Arnesen in his trio on two albums and touring both in Norway and abroad. Sandberg has also toured in Canada and USA playing the Terje Rypdal comissioned work Crimescene with Bergen Big Band, alongside both Rypdal and trumpeter Palle Mikkelborg. He has also sat in with the Norwegian saxophonist and opera tenor Håkon Kornstad on some concerts around Europe during the last years.

Sandberg released his debut album Or better still in 2013. For this album he put together a quartet with saxophonist Eirik Hegdal, pianist Erlend Slettevoll and drummer Stein Inge Brækhus. The idea was to form a group with a mix of musicians that he both had - and had not collaborated with in the past to record his contemporary jazz compositions. After touring with the quartet in 2014, Sandberg released the live album Clouds the same autumn.

February 06. 2018 he is releasing his third album Ensemble featuring the quartet with  guests musicians Thomas T Dahl and Steinar Krokstad.

Read more about Sandbergs prior work at www.olemarius.com.